May the Laserforce Be With You

Life is full of little ironies. As I am home from laser tag early tonight with my foot bandaged and iced I think I can paint a picture of how ironic things look to me right now.

Earlier this week I was invited to play with a team in the U.S. Armageddon laser tag tournament kicking off in Detroit in late June. This all came together in the final hour of the night before the deadline, so I was really pleased to be welcomed by some players I will meet for the first time when I arrive at the event. Meanwhile, I will be getting to know them by Facebook.

Yes, Facebook. My arm was twisted because I was told that in order to be found by a team I would have to make myself known to the laser tag community and this is simply the only way that would be achieved. Bottom line...I need to be on Facebook. So I got myself an account last week solely for the purpose of interacting with other laser tag people who I have not yet met. I have fought tooth and nail against joining Facebook. All my real life friends know that I hate everything about it because I think it opens up your private life to be known and over-analyzed by anyone and everyone with a computer or phone and frankly, there are facets of my life that are probably better off left not crossing. So, for anyone in my day to day life who is reading this, I love you, but please do not ask me what my Facebook name is for I do not want to be found...at least not outside of this laser tag world. But, for the purposes for which I needed it Facebook has worked beautifully and connected me with some new teammates, a chance to play in the Armageddon and, as of this writing I'm going to ballpark about 30 Facebook friends...mostly strangers who know someone with whom I am remotely connected and only two of whom I have met in person...once. OK, remember this because we're going to circle back here shortly.

When I didn't immediately find a team I started to have my doubts that because I was not yet known (my account was at that point empty of any information - still is - and I was for the moment Facebook friendless) and because I had no tournament experience so far that I would not be viewed as a desirable candidate no matter how much laser tag I actually play. So I resigned myself to the possibility that the Armageddon might not work out for me this time around, but I could get a jump on correcting these two issues by getting involved in some smaller tournaments in the meantime. So I searched around and, low and behold, there is a three man tournament happening at my local Laserforce center this coming week. Perfect! An upcoming first tournament to get my feet wet with actual tournament style competition. So I assembled a team and headed out with them on Wednesday for some practice since time had slipped by and I realized it has been several months since I've been to this particular center (although I've been playing every week, I've been focused on playing Zone and having other unique LT experiences in the meantime so Laserforce sort of fell off my radar for awhile). So I decided that between now and the Armageddon I should balance my laser tag a bit more and I plan to double up playing Laserforce on Friday nights and Zone on Saturdays so I will become equally proficient at both. It's Friday, so off I went to play some Force...and here's where things get ironic.

So, I'm back playing Force to get practice because I have never been in a tournament. The two tournaments that I just mentioned have not yet happened, so to my mind I am just an experienced player without this particular facet of experience. When I arrived tonight I recognized Mike, the game master, but did not think he would particularly remember me...I'd been away awhile and we only had brief encounters before that anyway. So I was a bit surprised when in the first game he specifically addressed me by code name and said "Tivia, would you stay on this team and Justin, please move to the other team". How did he remember my player name after that long an absence? Then he explained that he was balancing the teams and now the team I was on had four tournament players. At that comment three guys started looking around the briefing room wondering aloud who the fourth tournament player was and I started looking around too...was he talking about me?

Yes, he was. I played that game well and, although I came in second place, it was hard fought and I would have liked to have that score added to raise my average. Unfortunately, something went wrong when I entered the arena and my pack did not sync properly with my membership card so I ended up playing as Spike rather than getting the score credited to me as Tivia. Since the score will otherwise just be an uncounted memory I will post it just for my own satisfaction here...it's not my highest score and it's not the be all to end all, but it was decent and would have boosted my numbers, so what a bummer.

Anyhow, this opened up a conversation with Mike after the game because I wanted to know what went wrong and I also wanted to ask what specifically made him identify me as a tournament player...rolling back to the beginning of this story, I have not yet ever been in a laser tag tournament and thought my lack of being a tournament player was an albatross at the moment. I asked him if it was because I had planned to sign up for the tournament this week (which officially I haven't yet, so how would he know that) or was he possibly one of my 30 new Facebook friends that I don't know. Turns out, it's the result of the latter. He didn't immediately place me, but quickly put my name and face together realizing we now have a few Facebook friends in common, so he knew I was getting involved and pointed out something seemingly obvious..."Anyone who is signed up for the Armageddon is a tournament player". No argument, that's probably the class I belong in, but it struck me as really ironic solely because I still have yet to step foot into a tournament. Damn Facebook (I say that with a smile, but you see what I mean about everyone knowing everything about you, friends or not). It's cool...I like the distinction, but I just generally prefer to be underestimated rather than classified, as the latter can make you a target.

As it happens, it's a distinction without a difference. For the tournament this week all tournament players will default to level six, which is exactly where I am anyway...so it doesn't matter if he labels me as a tournament player or the Queen of the Pumpkin Patch (hmmm...I do like a royal title), it all works out the same. It just took me by surprise to have someone know more about me than I anticipated and find that already Facebook had made me unexpectedly visible...at least in this realm. But it's cool...so I guess I am officially a tournament player by virtue of signing up for two tournaments.

Now, that level six ranking and my scores for the night are another irony. If I had not played as well that level could go down...but seriously, I never play less than my best and I do want it to go up. Hence my irritation about the first game not counting. However, my scores were good all night and my game average is looking strong enough that I think I will be on the ranking chart for the top players in this coming month. By the end of April I plan to make myself a fixture there since I will be playing there a lot more.

Then we get to the last game I played tonight. I wanted to make that average rise, so I went into the game quite determined. I got all the bases very quickly and things seemed to be flowing. I got that feeling I get when I know (or strongly believe) I am going to be in the top position at the end of the round. Then...I went down HARD on my ankle. Nothing really happened to cause it. I just had a mis-step. But, man, did that hurt badly. A couple of players stopped to express concern, but I said I'd be fine and could walk it off. Well...not exactly. I did hobble to a hidey-hole while a few players who didn't realize I was injured kept on shooting at me. I thought, "damn, it was turning into such a great game until then". I could have exited the game...but, have you met me? I was stubborn enough to just stand in that corner until the end picking off players who ran past me. Hey, some people do this by choice...I did it out of necessity and in an effort to not give up on the game. However, I had been hit enough times during that retreat to the corner that I wasn't sure my points would hold up any longer. I just did what I could considering my ankle was throbbing.

It is with some small degree of satisfaction that I can report that in spite of my injury I had the top score of the game. I knew it was not worth risking playing on it further (not that I felt I could anyway...it will be fine, but it still hurts) so I left the center early. I hope I will be ok to play some Zone tomorrow night. However, here's the irony...of all weeks for this to happen, this has got to be the worst timing because not only is it a big ol' question mark going into the three man tournament in the middle of the week, but I am also scheduled to compete in my first tae kwon do contest at the end of the week. So I was expecting particularly aggressive training this week to make sure I am ready...plus Grandmaster Lim (founder of Hupkwondo) is coming to my class to observe so I figured this was also going to be an important time to perform well...AND it was only just last night that I informed my instructor that I was going to be involved in the Armageddon so I welcomed a more rigorous training regimen to make sure I was up to snuff stamina-wise. So, all these things considered, I think it is very ironic that instead of being in an arena right now practicing to be in my first tournament that I am instead a wounded tournament player sitting on the couch hoping my ankle will be well for me to participate in any tournament at all. Sigh...think good thoughts. I hope to be back on my feet before the weekend is over...no sprained ankle will keep this Tivia down. :)

Scent of a Laser 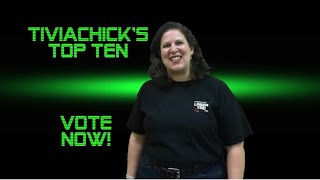